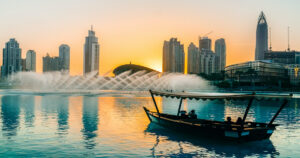 Building global governance
United Arab Emirates (UAE) Trade Minister Thani Al-Zeyoudi said in an interview with Bloomberg TV in Davos, Switzerland on the 20th, “Crypto assets (virtual currencies) will play a major role in UAE trade in the future. ‘ said.
The UAE is active in promoting cryptocurrency businesses, has laws favorable to cryptocurrencies, and is home to many cryptocurrency-related companies. Last March, the Virtual Assets Regulatory Authority (VARA) was established to specialize in cryptocurrency licensing.
Relation: UAE Introduces Licensing System to Attract Cryptocurrency Companies
“The most important thing is to ensure global governance regarding cryptocurrencies and cryptocurrency companies,” Al-Zeyoudi said. He added, “We have started attracting some companies with the aim of building together the proper governance and legal system that is needed.”
In the latest regulatory move, the UAE passed a new law on the supervision of virtual assets, establishing a regulatory regime at the federal level.
According to a UAE-based lawyer, the law will go into effect on the 14th, requiring entities conducting cryptocurrency-related activities to obtain licenses and approvals from VERA. Non-compliance with the regulations is subject to severe penalties, including a fine of up to 350 million yen (10 million AED).
At the same time as actively attracting cryptocurrency companies, it will appeal to the UAE’s stance of encouraging compliance with international standards by imposing strict regulations.
On the 19th, the Minister of State for Artificial Intelligence, Digital Economy and Remote Work Applications of the UAE took the podium at an open forum on cryptocurrencies at the annual meeting of the World Economic Forum (WEF) (Davos Meeting).
Minister Omar Sultan Al Olama said, “It is definitely a positive thing for a cryptocurrency company to call the UAE home.” The UAE’s goal of becoming a hub for cryptocurrency activity appears to be unchanged.
UAE’s cryptocurrency ecosystem
Dubai-based blockchain ecosystem Crypto Oasis announced today that by the end of 2022, the ecosystem will have over 1,650 organizations and over 8,300 people employed in the sector. bottom.
Crypto Oasis is a rapidly developing blockchain ecosystem focused on the Middle East and North Africa (MENA) region. At the forefront is said to be the Dubai Multi-Commodity Center (DMCC), home to more than 500 blockchain organizations.
Crypto Oasis added more than 200 organizations and created more than 1,300 new jobs (up 19%) in the fourth quarter of last year in the cryptocurrency industry, which has been tough since last year.
Crypto Oasis attributed this to the UAE’s growing reputation as a hub for blockchain companies. “The UAE is a perfect blend of talent and capital built on world-class infrastructure,” said co-founder Saqr Ereiqat.
According to the Digital Economy Strategy announced by the UAE Ministry of Economy (MoE) in 2022, the goal is to double the contribution of the digital economy from 9.7% to 19.4% over the next decade. It is said that it supports the efforts of the Metaverse.
Cryptocurrency-related investments also appear to be active in the UAE.
On the 11th, the establishment of a 130 billion yen Web3 fund was announced. “Venom Ventures Fund (VVF)” invests in a wide range of Web3 (decentralized web) projects such as DeFi (decentralized finance), asset management, payment, GameFi (game + finance), regardless of specific blockchain. It is said that it is a policy to go.
Relation: Former BlackRock execs join forces to launch $1 billion Web3 fund in UAE
nhttps://imgs.coinpost-ext.com/uploads/2021/09/Dubai-UAE.jpg -->


The post UAE Minister “Cryptocurrencies will play a big role in the future of trade” appeared first on Our Bitcoin News .