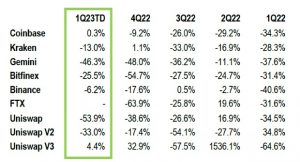 According to data compiled by JP Morgan Chase, the trading volume of Coinbase, a major US crypto asset (virtual currency) trading company, has continued to decline as of January 2023. is on a recovery trend. After the demise of FTX, Coinbase’s reputation as a reliable exchange seems to be paying off.
It’s worth noting that Coinbase’s average daily trading volume (ADV) is $1.6 billion so far in January, up slightly by 0.3% from the previous quarter. On the other hand, the trading volume of other exchanges decreased. For example, Kraken is down 13% and Gemini is down 46%.
Coinbase ADV is recovering (Source: JPMorgan/CryptoCompare)
The slight rise in Coinbase’s trading volume also points to a changing environment for the company, given that the exchange’s trading volume continued to decline last year.
｜Translation: coindesk JAPAN ｜Editing: Takayuki Masuda | Image: JPMorgan/CryptoCompare ｜Original: Coinbase Trading Volume Increases in January While Other Exchanges See Declines: JPMorgan